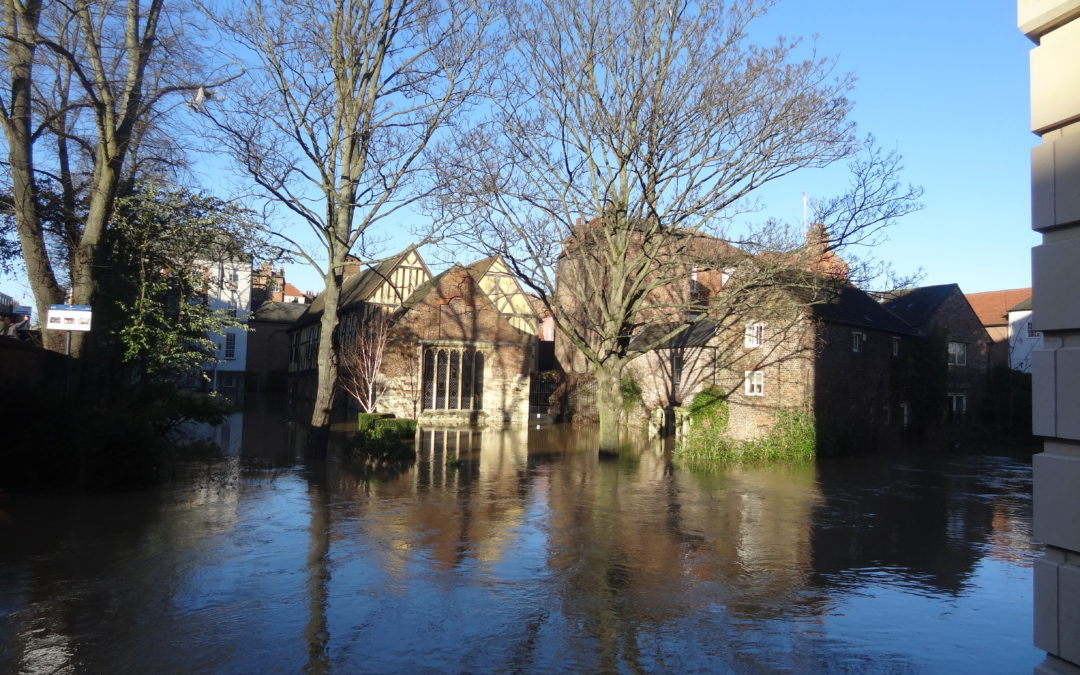 On Boxing Day 2015, the Merchant Adventurers’ Hall in York flooded – its proximity to the River Foss leading to the 14th Century Guildhall to be deluged with over a metre of water. This is the story of the flood and the Hall’s recovery.

The Merchant Adventurers’ Hall has sat adjacent to the River Foss in York for seven centuries. Its location is no accident, its site chosen by a group of merchants in the 14th Century as it was adjacent to the river and to its larger neighbour – the River Ouse enabling them to have direct navigable access to trade out of the City and across to Europe. The importance of commerce and in turn the riches which were bestowed on the merchants if they were successful overcame any reservations there may have been to the real danger of flooding.

Evidence suggests that the effects of flooding and its positioning below ground level was an issue from the very early days of the Hall’s construction. Timber supports were replaced with robust stone pillars within 100 years of the building being completed and the floor was gradually raised over centuries to limit the impact on the inhabitants who used the Undercroft as an Alms-house. The Hall had flooded three times in the last 150 years. However with the installation of the Foss Barrier in 1987 (to protect the properties along the River Foss which had been severely affected by floods in 1982) it was hoped that the Hall would no longer see another flood. This was not to be.

It had rained solidly for the whole of Christmas Day in and around the City, much of which made its way down stream to the River Foss. The first flood warning was issued on the morning of 26th December – the Hall was checked twice during the day and although the river was high the level was being maintained by the pumps at the pumping station at the Foss Barrier just minutes away from the Hall.

The pumps were at capacity pumping out water but at the same time water had also found its way into the pump room. A catch 22 situation was developing where if the barrier remained down and the pumps failed, water would build up and flood hundreds of properties. The drastic alternative was to lift the barrier and let the Ouse flow back into the Foss which would flood many homes and businesses along the river. A decision had to be made in 15 minutes. The barrier was lifted.

By the evening, water was quickly rising up the gardens, seeping up through the floor and eventually gushing through the walls of the 15th Century Chapel. Anything that could be moved upstairs was removed from the flooded ground floor and although efforts were taken to stem the flow, eventually nature had to take its course and items too heavy to remove such as a 16th Century Altar Table and 17th Century Oak Chest had to be left in the rising flood waters to the dismay of the staff. The water continued to rise the next day and peaked in the Undercroft at 1.1 metres in the early hours of 28th December – it became the highest ever recorded flood level.

After emergency repairs to the barrier and pumps, the water began to recede. At 8.30am on the morning of 29th December the flood waters remained welly high in the chapel, with all pumps on the River working at capacity – a puddle on the Undercroft floor was all that remained by 4.30pm the same day. As volunteers from across York and further afield arrived at the Hall donning wellies and brandishing marigolds the clean-up operation began in earnest. This process continues today.

Despite being full of dehumidifiers and with an awful lot of work still to be done, the Hall opened in February 2016 in time for the JORVIK Viking Festival. In October 2016 we were advised that the Undercroft and Chapel were dry which enabled us to move onto the next stage of flood recovery. In the first few months of 2017 we were able to move on apace with the restoration including the replacement of the reception floor, the lime-washing of the Undercroft and perhaps the largest task of all, the full restoration of the Chapel. The flood damage to the paintwork of the pews in the Chapel allowed us to use scientific techniques to discover what colours the 17th Century pews would have been when they were first installed in the Chapel in the 1660’s.

The restoration of the Hall after the floods of 2015 is now nearly at an end. However its story will be continued to be told as it becomes another layer in the fascinating history of this ancient building.