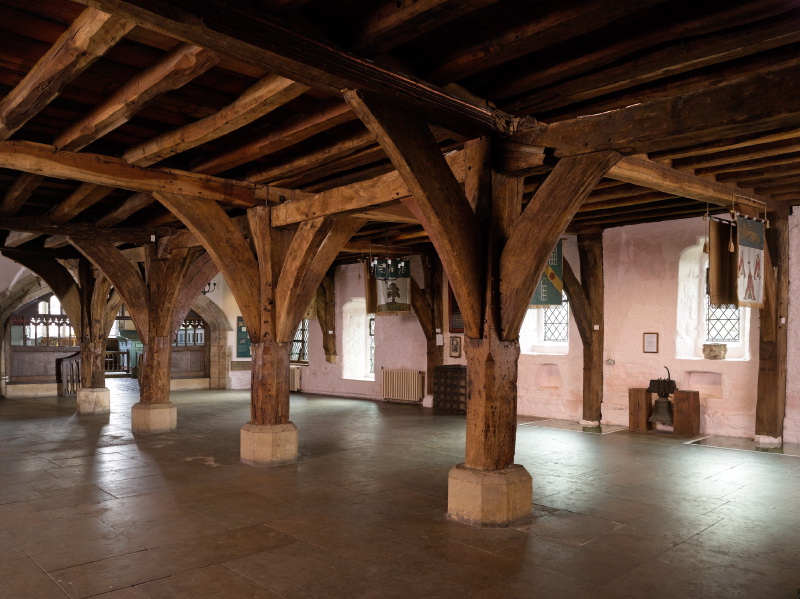 For this blog post we are looking at the Undercroft…a space very different from the grand surroundings of the Great Hall. This space was never designed to be used by the merchants but for the sick and poorer member of York’s society, many of which had fallen on hard times.

An undercroft is traditionally a vaulted chamber, partly or fully underground, usually used for storage. The term can also be interchanged with ‘crypt’, though a crypt was used primarily as a religious space for burials or for holding relics, whereas an undercroft was used for general storage purposes. In the case of the Merchant Adventurers’ Hall it was an almshouse or hospital and although below ground level not strictly underground!

In 1373, King Edward III licenced an almshouse to operate in the Undercroft to provide care for thirteen (the number of Christ and his apostles) “poor and weak persons”. Niches in the walls mark where inmates stored their belongings and many of the oak posts have scorch marks on them left behind by candles; candles and torches were, of course, the only way in which anything could have been illuminated in the space for 500 years.

An interesting board can still be seen in the Undercroft revealing the fascinating story of the delivery of free medical advice and treatment, 150 years before the NHS was created. From 1788 to 1808, the York Dispensary rented two rooms from the Guild to provide free treatments to the deserving poor. In the twenty years that the dispensary operated from the Merchant Adventurers’ Hall it treated over 17000 patients! There are a number of benefactor boards in the Undercroft demonstrating other charitable traditions maintained over the centuries.

The Undercroft was used until the beginning of the 20th Century when the last remaining Company pensioners were moved to more modern surroundings. To this day the Company of Merchant Adventurers still looks after 13 deserving older members of York’s community, carrying on a tradition that has existed for over 640 years

Why not visit the Merchant Adventurers’ Hall and see the Undercroft for yourself? Visitor information including opening times can be found below.