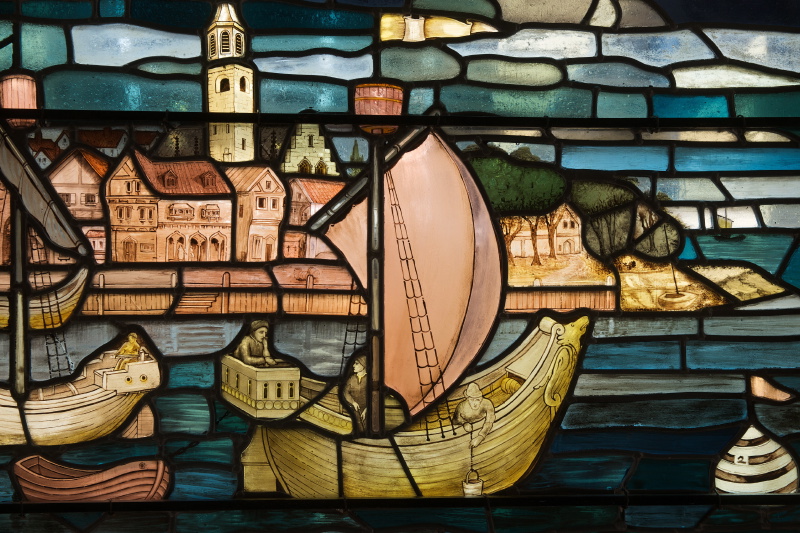 For this blog post we are looking the stained glass windows which can be found in the Undercroft, Chapel and the Governor’s Parlour of the Merchant Adventurers’ Hall. The Hall has a small but beautiful collection of stained glass windows dating from the last 150 years. Documents in the Company’s archive shed light on these and the history of earlier examples.

In 1490, William Cleveland who was the Master of the Hospital in the Undercroft paid £3 13s 4d, the equivalent of just over £2,000 in today’s money for a glass window with 7 panes to be installed at the High Altar in the Chapel. Three years later, John Gilliot, the latest Master of the Hospital paid for a window to be installed on the north side of the Altar which depicted Saint John and Saint Thomas. Whilst it was common for churches and chapels of the time to have high quality windows, Trinity Chapel had a number of high status examples paid for by successive Masters wishing to outdo each other with increasingly expensive acts of patronage!

Unfortunately these windows no longer survive with only fragments discovered in archaeological excavations. The present windows in the Chapel are stylised depictions of the Hospital and Mercers’ seals installed in the Edwardian period and the beautiful 1998 East window dedicated in memory of John Saville, Governor of the Company in 1961-2. 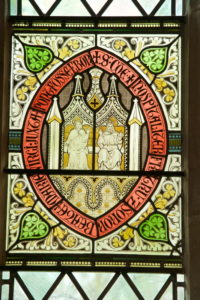 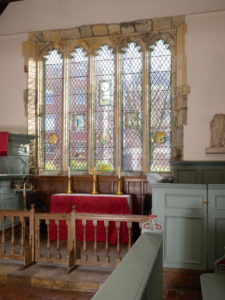 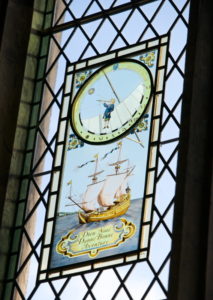 In the Undercroft there is a highly decorative window on the eastern wall depicting the Annunciation. This window was designed by Henry James Stammers in 1960 and was commissioned for the Former York College for Girls on Petergate. When the school closed in 1997, the building remained empty until it was redeveloped in 2004 and the window donated to the Company. The window underwent restoration before being installed in the Undercroft in memory of Sir Colin Shepherd, Governor of the Company in 1997-8.

The other notable stained glass windows in the Hall are to be found in the Governor’s Parlour. These windows date from the early 20th Century and depict the importance of international trade to the Merchant Adventurers. One panel shows the River Ouse complete with ships whilst the other is a comparable trading scene, possibly showing Copenhagen in Denmark.

Why not visit the Merchant Adventurers’ Hall and see the stained glass for yourself? Visitor information including opening times can be found below.