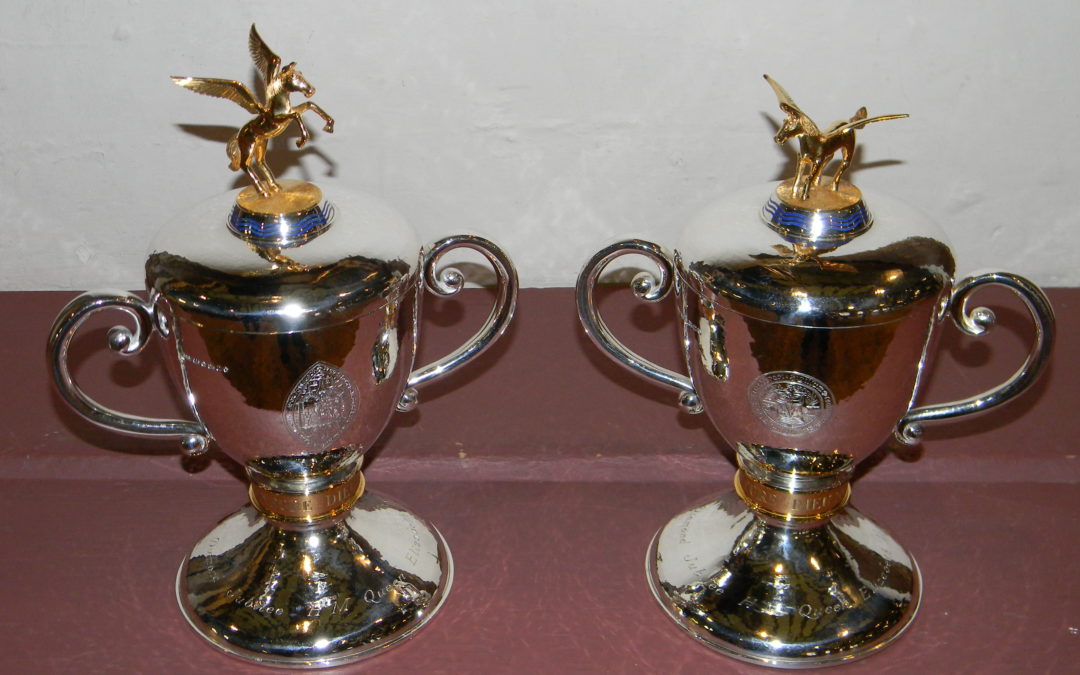 The Ceremony of the Loving Cup is traditionally linked with the assassination of the Anglo-Saxon King Edward in 978.  The story grew that his stepmother had plotted his death so that her son Ethelred (the Unready as we know him) should succeed him.  On arrival at Corfe in Dorset, Edward is supposed to have been stabbed in the back whilst he was drinking from a goblet of welcome held in both his hands.  To prevent any repetition of this dreadful event, the back of the drinker is now guarded by their neighbour in the Ceremony. 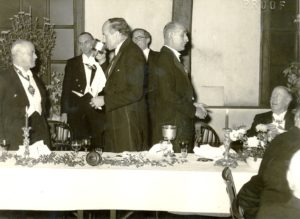 The Loving Cup Ceremony in 1952

When your neighbour with the Cup in their hand turns round to face you, you rise from your seat and you each bow to each other.  The Merchant Adventurers traditionally toast “Bonne Aventure”, so you toast and then they drink and wipe the Cup with the napkin provided. The drinker hands you the Cup and you bow to each other again.

You turn round to face your second neighbour, on your other side.  They rise and you bow to each other.  You toast “Bonne Aventure”, drink and wipe the Cup.  You then hand the cup to them, and you bow to one another for the second time.

You then turn your back to the person to whom you have just handed the cup thus guarding their back to prevent assault in the manner suffered by King Edward.  When they have finished and handed on the Cup, you resume your seat.

No more than three persons should be standing at the same time.

We have two different sets of Loving Cups within the silver collection; three which are identical and were the gift of the Mercers Company of London in 1952. These were given to the Merchant Adventurers by the Mercers to mark their association with the Company, renewed after the end of the Second World War. These cups are part of a set of small copies of the well known Bank of England Loving Cups, made in 1694 which were reproduced in smaller form in 1887 and given to each member of

the London Mercers’ Company as a memento of Queen Victoria’s Jubilee that same year.

The other cups are a pair of more traditional Loving Cups with two handles and lids. The main bodies of the cups are hammered from single pieces of silver and engraved with the arms of the Merchant Adventurers of the City of York and on the reverse of one the Seal of Trinity Hospital 1371 and the other the Seal of the Mystery of Mercers 1435. The lids are also  hammered from single pieces of silver. One lid has a terminal in the form of a Pegasus rampant and the other a Pegasus passant (which are on the Coat of Arms of the Merchant Adventurers). The scrolled handles were moulded using the lost wax technique. Engraved on the collar of each cup is the motto of the Company of Merchant Adventurers: “Dieu Nous Donne Bonne Aventure”. These were made for the Diamond Jubilee of Queen Elizabeth II in 2012.

Why not visit the Merchant Adventurers’ Hall and see these silver cups for yourself? Visitor information including opening times can be found below.