For we must all appear before the judgement seat of Christ; that every one may receive the things done in his body, according to that he hath done, whether it be good or bad.

The Mystery of Mercers bring forth the Last Judgement…

In 2022 the traditional Cycle of Mystery Plays returns to the streets of York. The Company of Merchant Adventurers of the City of York, once known as the Mystery of Mercers, traditionally present or ‘bring forth’ the last play in the cycle, The Last Judgement.

Despite their historic importance and cultural influence on the city, a 21st century audience may be forgiven for not knowing much about the plays they are watching. So…

…what were the Mystery Plays?

The Mystery Plays were originally a series of 48 plays brought by a different guild or collection of guilds in the medieval period. These plays were known as the Corpus Christi plays as they were associated with the church Feast of Corpus Christi, celebrated between late May and late June. The series of pageants, dramatised in order stories from the Old and New Testaments of the Bible, starting with the Fall of the Angels and the Creation and finishing with The Last Judgement. 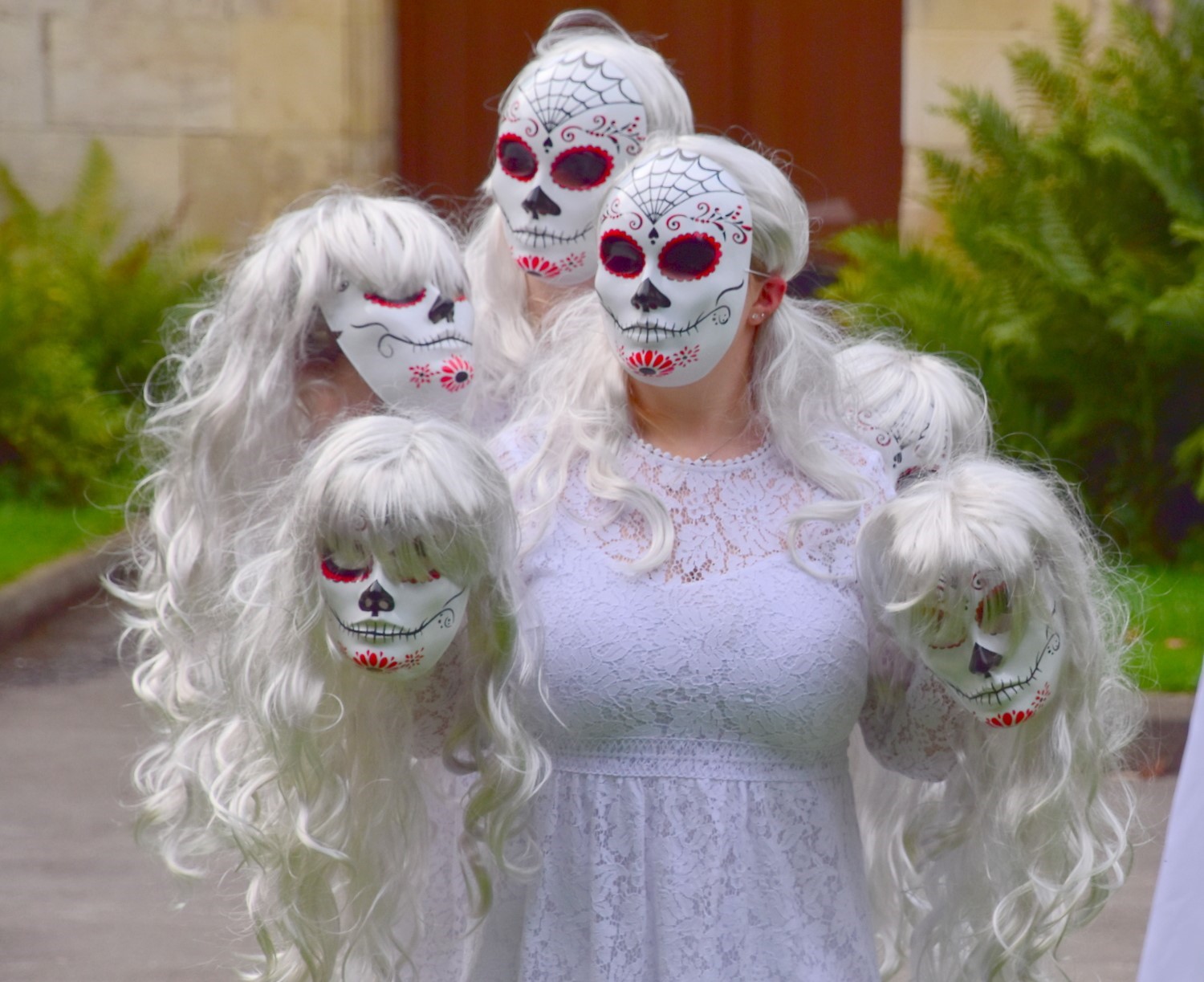 Performers and their ‘friends’ from 2018’s The Last Judgement.

The plays were traditionally performed on decorated wagons that moved around the city allowing different crowds to watch. There were usually 12 stations from which to watch the plays and a full cycle of the 48 plays would take 20 hours from dawn to dusk in one day. Musical instruments would be played such as drums and pipes to call the busy citizens from their homes. The audiences would have gathered around the wagons with many in the crowd recognising friends and neighbours taking part, creating an engaging, intimate and we imagine, lively atmosphere!

Costumes and masks would be worn for characters like angels and devils whilst biblical soldiers and peasants would have dressed in clothing familiar to those watching. Beards and wigs would have also been worn as all the characters, including the female roles, would have been played by men. The wealthier guilds would no doubt have invested a little more into their costumes and props for the entertainment and marvel of their co-citizens.

Each play was owned or performed by a particular guild or Mystery every year, hence Mystery Plays but…

…what is a Mystery?

There are many theories as to why the Mystery Plays are so called. Some theories look at the mystical religious truths of the Bible stories whilst others look at the guilds that produced each play; if you were learning the skills of your craft, you were learning the ‘mystery’ of your trade. Other theories include Mystery origin in the Latin word ‘mysterium’ meaning secret, or the French ‘mystere’ meaning craft.  Although not definitive, it is most likely that the guilds of York were known as mysteries and guild members were forbidden to reveal trade secrets. They were lay productions, regulated by the Corporation. In Latin they called themselves ‘gilda’. The Mystery Plays is a relatively modern name, first used in 1890 and would not have been familiar to the residents of medieval York! 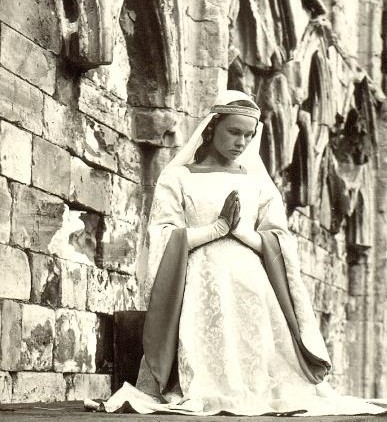 A young Judi Dench as the Blessed Virgin Mary in a production of the Mystery Plays in the Museum Gardens in 1957.

The guild system developed from people involved in the same occupations gathering together to provide mutual social, spiritual and financial support. They were self-regulated and were often linked to religious fraternities. For example, the Merchant Adventurers started out as a Fraternity for men and women of Our Lord Jesus Christ and the Blessed Virgin Mary before becoming known as the Mystery of Mercers – merchants who dealt in fine cloth and textiles.

Some guilds would be given specific plays, for example the Bakers Guild would perform ‘The Last Supper’  where bread was an important part of the play. The Shipwrights built the Ark, Mariners would tell the tale of The Flood whilst the Guild of Butchers have traditionally told the story of the Crucifixion. Like the Butchers, the Merchant Adventurers have always presented The Last Judgement and continue to this day, so…

…what are the Mystery Plays today?

The plays, after nearly 200 years, were stopped during the Reformation with the final production taking place in 1569. The cycle of plays remained dormant for around 400 years, during which time many of the guilds which had supported and performed the plays died out. From their heyday in the 15th Century when there were 96 guilds active in York, today in 2022 there are 8: The Company of Merchant Adventurers of the City of York, The Company of Merchant Taylors of the City of York, Gild of Freemen, Guild of Building, Butchers Gild, Company of Cordwainers, Guild of Scriveners and the Guild of Media Arts. 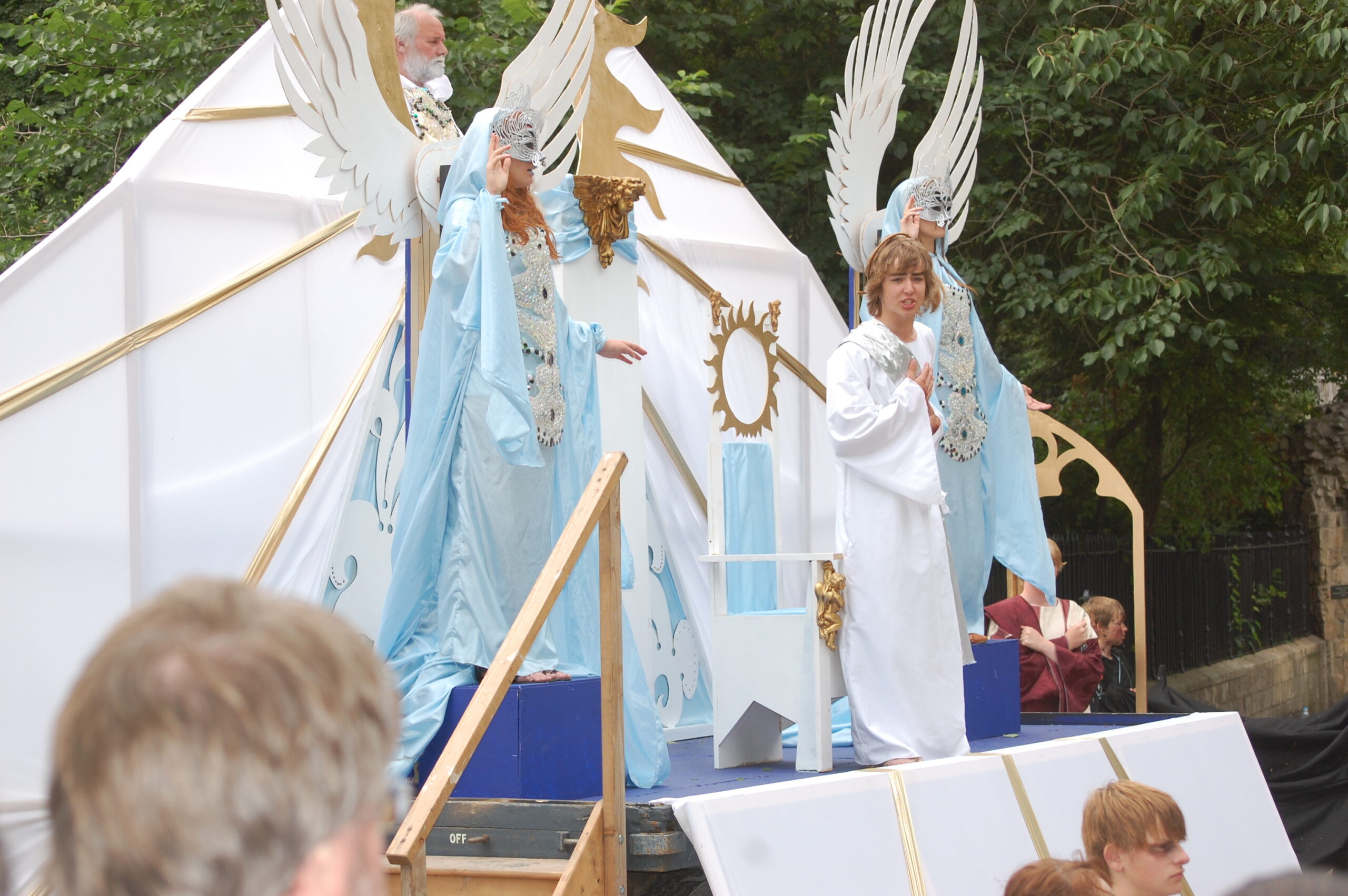 Tomas Moore from Pocklington School as Jesus Christ during a performance of The Last Judgement in 2010.

In 1951, the York Mystery Plays were revived in a production on a fixed open air stage in the Museum Gardens. These were followed by performances in York Theatre Royal in 1992 and 1996; other stage performances have taken place in 2000 and 2016 inside York Minster and in 2012 the plays were presented once again in the Museum Gardens. In 1998 the York Guilds and Companies took over, establishing a four year cycle with the plays returning to their traditional form on wagons.

The York Mystery Plays have enthralled and enraptured audiences with stories that are as old as time but as relevant today as they were 600 years ago. It is also true that like the wagons they are performed on, they will roll on, entertaining York’s citizens and visitors for centuries to come. 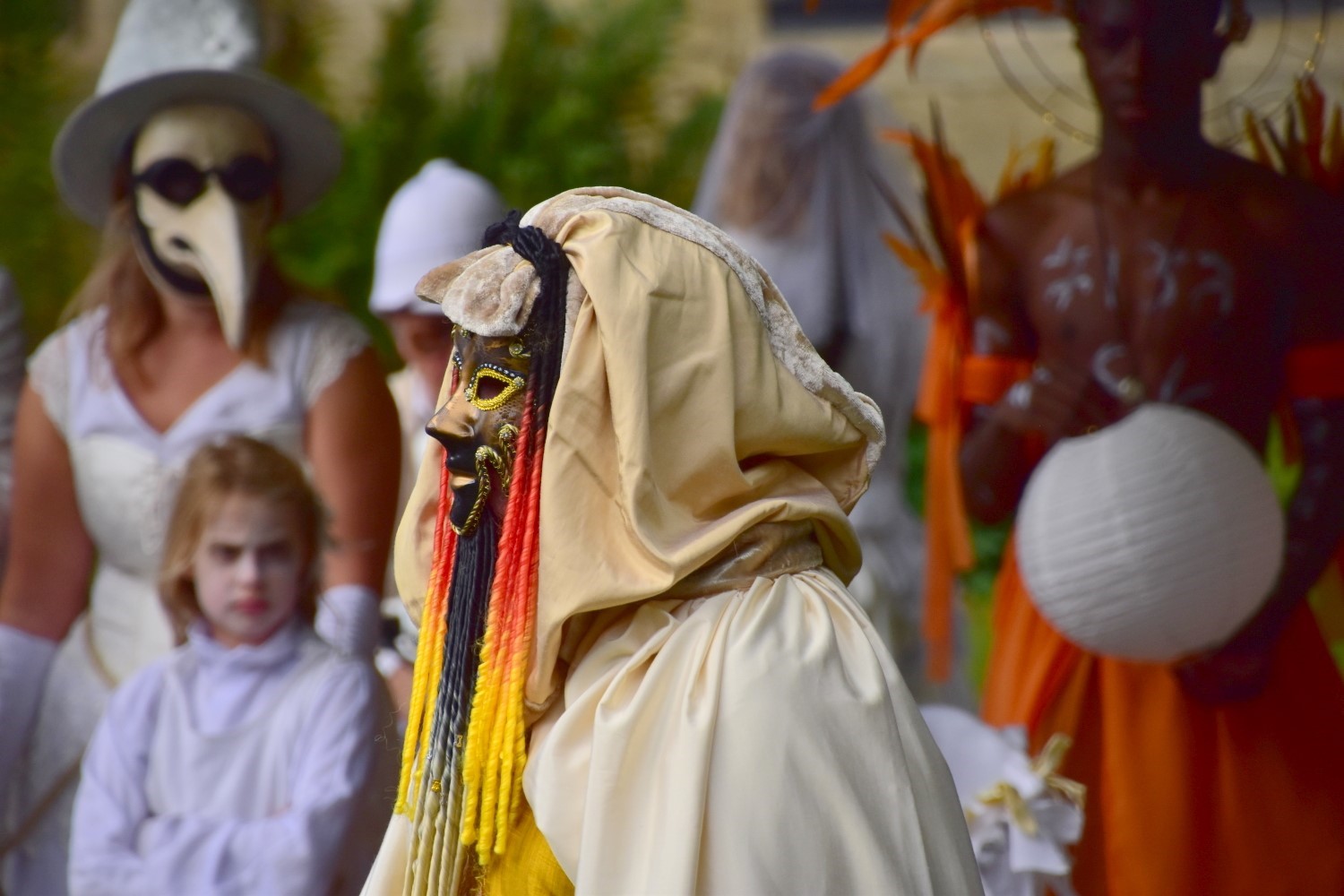 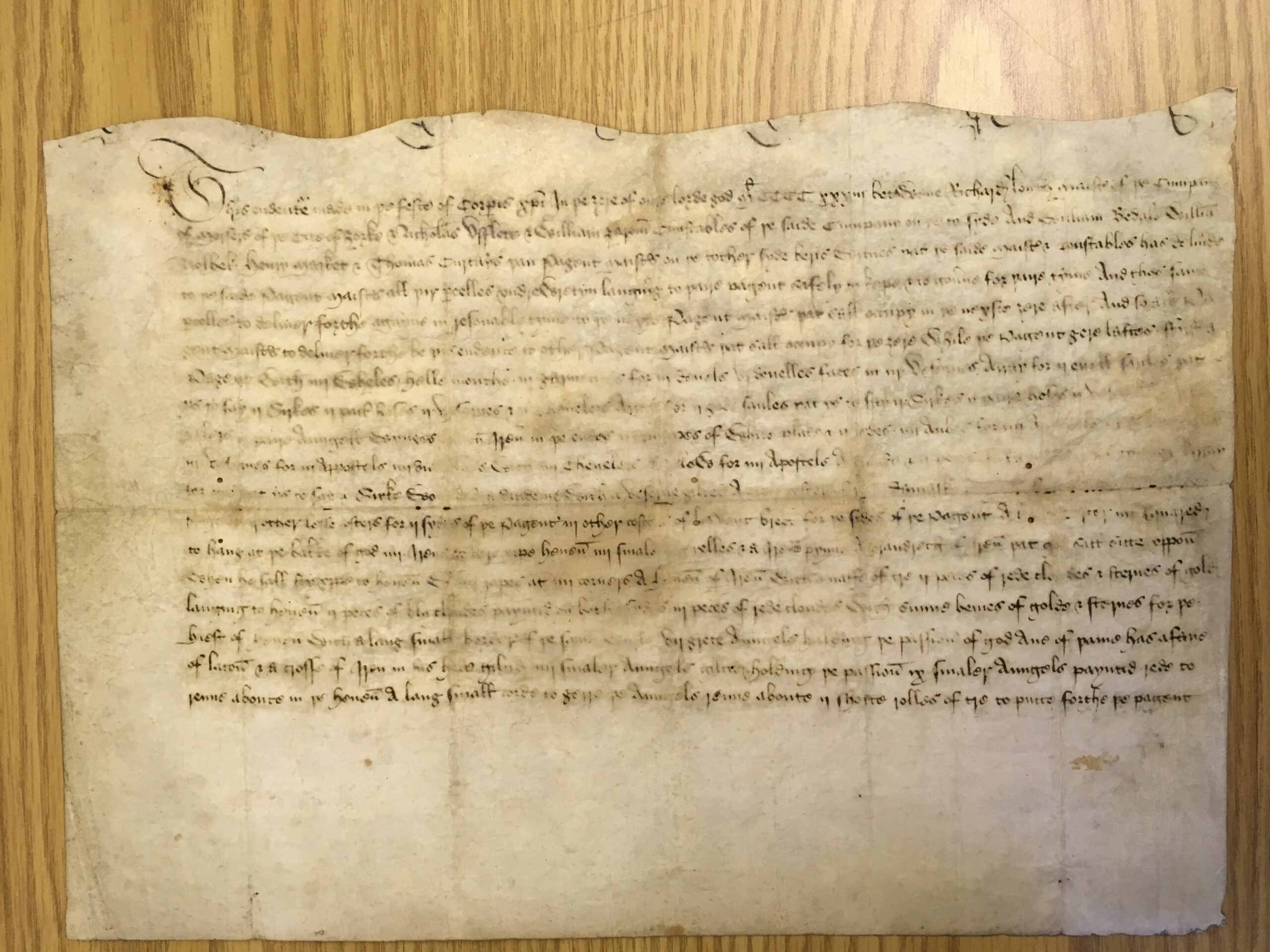 The Inventory of the Mercers Pageant, 1433.

This unique document is a list of all the items required for the Mercers to put forth their play, The Last Judgement in 1433. Amongst the list are ‘Angell wings with iron in the endes’ and ‘A cloud & II peces of Rainbow of tymber.’ Click here for the translated version of the Inventory of the Mercers, 1433. 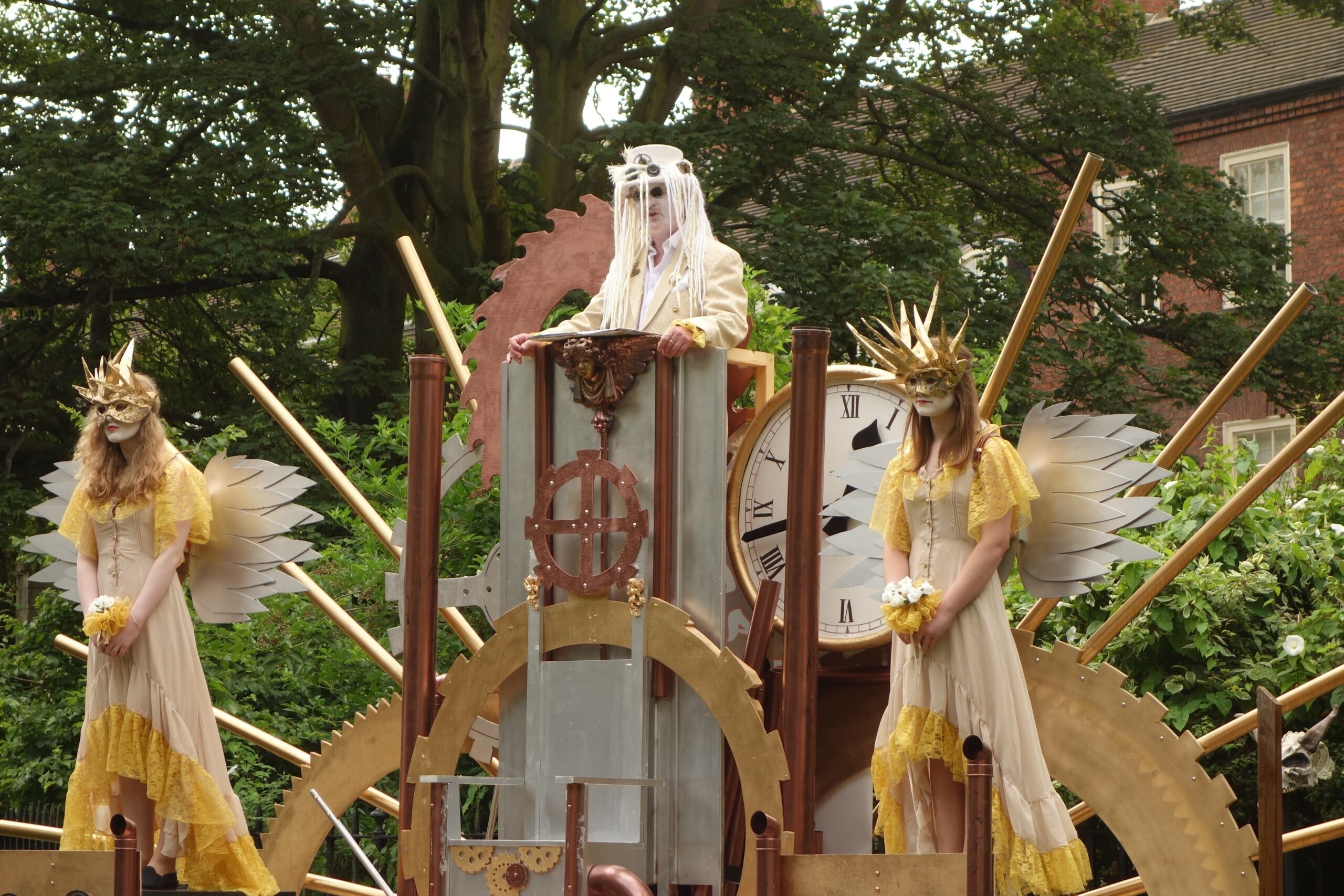 Alan Heaven has been the Director of The Last Judgement play for the last four cycles and is seen here playing God in 2014.

In 2022 on 19th & 26th June there will be 8 plays performed on wagons which will be pulled around the city and performed at four stations;  College Green, St Sampson’s Square, St Helen’s Square and King’s Manor. The plays are free to watch at three of the locations, with the exception of a ticketed stand at King’s Manor. In addition 5 plays will be performed inside Shambles Market on 22nd & 23rd June. For more details see the dedicated York Mystery Plays website.

The Plays put forth for the York Cycle in 2022 are:

Creation to the Fifth Day – The York Guild of Building, directed by Janice Newton

Fall of Man – The Gild of Freemen and Vale of York Academy, directed by Bex Nicholson

The Building of the Ark and the Flood – The Company of Cordwainers and the York Mystery Plays Supporters Trust, directed by Paul Toy

The Last Supper – The Company of Merchant Taylors and Lords of Misrule, directed by Emily Hansen

The Crucifixion and Death of Christ – The Company of Butchers and Riding Lights Acting Up!, directed by Kelvin Goodspeed and Jared More

The Appearance of Jesus to Mary Magdalene – The Guild of Media Arts and the Guild of Scriveners, directed by Jess Murray

The Last Judgement – The Company of Merchant Adventurers, directed by Alan Heaven

Rehearsals are well under way for the 2022 Cycle of Mystery Plays and Alan Heaven, the Director of The Last Judgement, will be taking the helm once again for the ‘End of Days’. He is joined by a enthusiastic ensemble of local actors and The Ravens Morris; a Steampunk Morris Dancing group from Pocklington in East Yorkshire. 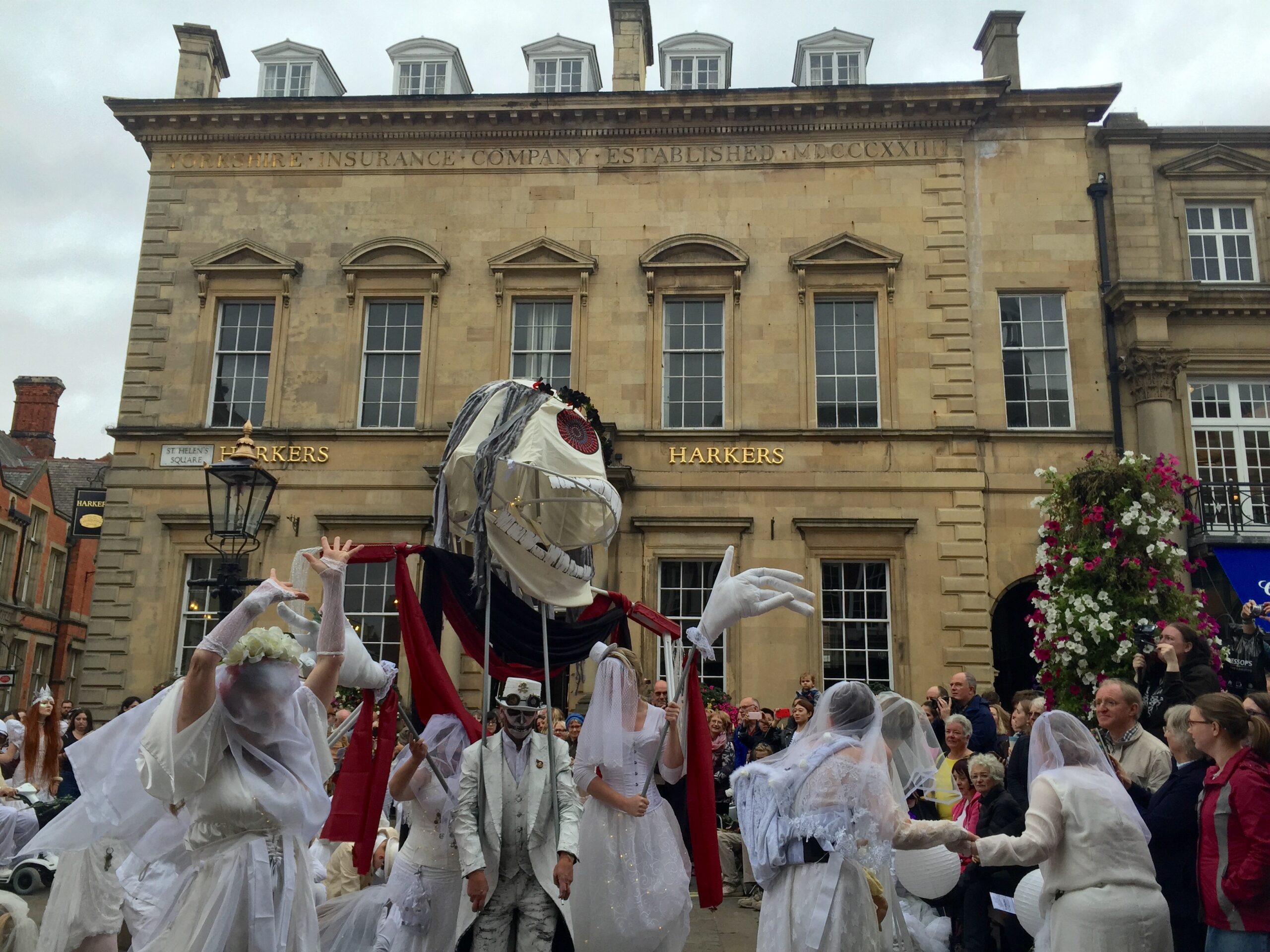 A Día de Muertos or Day of the Dead theme for 2018’s production of The Last Judgement, here in St Helen’s Square.

“The Last Judgement is a concern and truth for all times”

“Whilst considered by many, in this day and age, to be a tribute to our city’s medieval past and a cultural delight, how is our play and its fellows relevant to our age? We live in a society that considers itself more scientific than supernatural in its actions and beliefs but a recent world pandemic, starvation in parts of Africa, the Middle East and Afghanistan, turbulent world politics and threats of warfare are common sadly to both the medieval mind and our own…”

Read here a personal view of the Mystery Plays and their impact on a 21st century audience by Jenni Bartram, Merchant Adventurer. 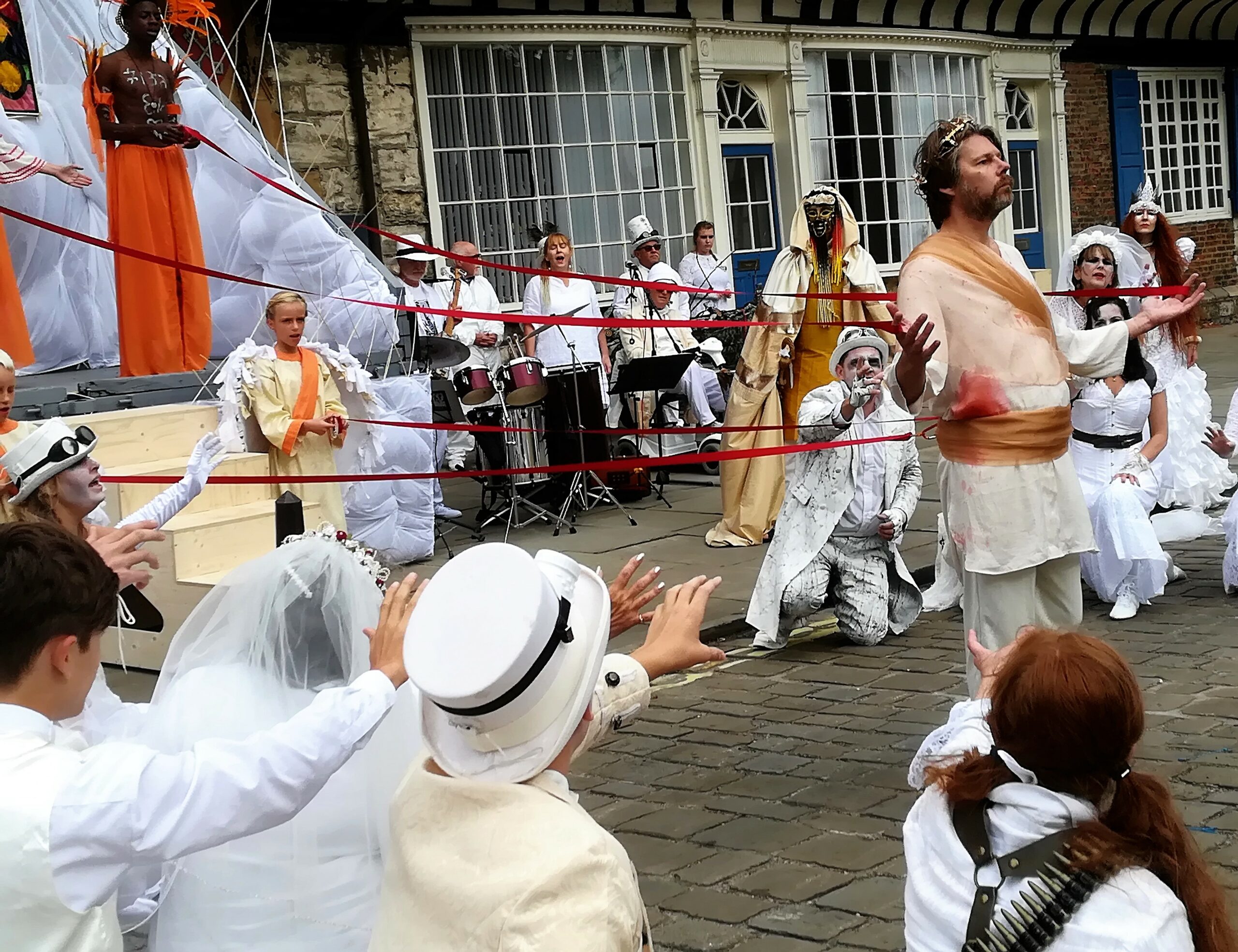 A scene from The Last Judgement outside of St William’s College in 2018. The College is one of the regular stations for the performance of the Mystery Plays.

The York Mystery Plays are the not for profit organisation who promote and produce the four yearly wagon plays.

The National Centre for Early Music holds the archives for the York Mystery Plays from their revival in 1951 to the present day.

The York Mystery Plays Supporters Trust, established in 2012 support and maintain the community tradition of the plays in York.

The York Plays is a unique manuscript at the British Library consisting of 49 religious plays, ranging from the Creation to the Last Judgement and the Coronation of the Virgin. This document dates to the heyday of the plays in 1490.

The Soundscapes of the York Mystery Plays was a University of York and British Academy project using digital audio to recreate York’s 15th and 16th Century soundscapes from the noise of the crowd and the rolling of wagons to weather conditions and the sound of distant bells.